Following his final examination at a German secondary school, Johannes Goetz studied the organ with Professor Ludwig Doerr and the harpsichord with Professor Stanislav Heller at the Academy of Music in Freiburg/Breisgau. In 1988 he graduated in Church Music. From 1989 to 1992 he continued his studies to obtain a concert diploma at the Royal Academy of Music in Brussels with Hubert Schoonbroodt and in 1992 he graduated there as a soloist with the grade “excellent”. Since 1992 Johannes Goetz has been working as music director of the district of the Black Forest of the Archdiocese of Freiburg. His widespread activity as a conductor has enabled him to perform important works of the oratory repertoire: in addition to Haydn’s “Creation,” St John’s and St Matthew's Passion and the Christmas Oratorio by Bach, Brahms Requiem and many works for full orchestra. He is responsible for the academic training of young church musicians and is a lecturer in church music workshops. As organist of the Basilica of St Peter in Freiburg he accompanies the liturgy in one of the most beautiful baroque churches in southern Germany. He also directs the International Organ-Festival in St Peter, near Freiburg. He founded and manages the festival “With Bach through the Region” (that is the region around Freiburg). His repertoire includes the main works of German and French music for organ. His intensive activity as an organ soloist in concerts has led him all over Germany, Switzerland, the Netherlands, Belgium, France, Poland, Russia, Siberia, Spain, UK and Italy. His artistic work has been documented in radio and TV productions as well as in one CD. 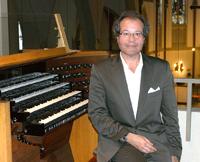