Cristel De Meulder studied at the Royal Flemish Conservatory of Music in Antwerp, where she obtained a first prize in chamber music and the Hoger Diploma in voice. She obtained her Master's Degree at the Royal Conservatory of Music in Brussels. She teaches at the Music Academy, close to Antwerp. After masterclasses in Lied interpretation with Noëlle Barker and Geoffrey Parsons and in Bach cantatas with Sigiswald Kuycken, she continued her specialised studies in advanced vocal techniques at the Lichtenberger Institut für Gesang und Instrumentalspiel, directed by Gisela Rohmert. Her repertoire covers a wide spectrum: oratorios, cantatas, passions, orchestral masses, chamber music and the classic religious repertoire for all occasions. She also has an affinity for the romantic Flemish repertoire, sacred as well as secular, in works for solo voice with accompaniment by organ, harmonium, or piano. She is no stranger to contemporary music either, appearing regularly with the Aquarius Ensemble, directed by Mark De Smet. She participated as soloist in the first performance of the opera Aquarius by Karel Goeyvaerts. In 2006 she participated also in the first performance of Elegy for Kayano for soprano solo, basset horn, percussion and voice, set to music by Noor Sommereyns. She performed this work in Japan (Osaka, Nagasaki, Hiroshima and Tokyo) in 2007. She is in regular demand as a soloist projects ranging from early music to contemporary works, in her own country as well as Germany, the Netherlands, France, Italy, Malta, Spain, Portugal, Scotland and others. She has toured also in Asia, South Africa, the Philippines and several South American countries.

Jan Van Mol has given concerts in nearly every country in Western and Eastern Europe: Belgium, the Netherlands, Germany, Sweden, France, Spain, Portugal, Italy, DDR, Poland, Austria, Bulgaria, Slovenia, Bosnia, England, Ireland, Luxemburg, Switzerland, Russia, Japan, Brazil, Uruguay and the Philipines. Many of these were broadcast on the radio. He has recorded three LPs and several organ music CDs, some of which have received great critical acclaim in the foreign professional press. Besides being an organist he also plays the harpsichord and he was among the first to rediscover authentic harmonium music. He has written many articles about organ and published unknown ancient Flemish organ music. Jan Van Mol lectures at the Antwerp Conservatory, and is and organist of St Paul's church in Antwerp. As such he plays an historic organ, possibly the most important ancient instrument in the southern Low Countries. As the inspiring founder of Calcant, Antwerp Organ Association, he has taken countless initiatives (organ concerts, trips, walks, cycling-tours) in order to bring the organ nearer to the public. 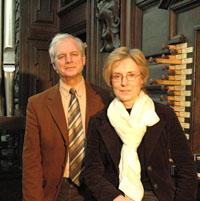